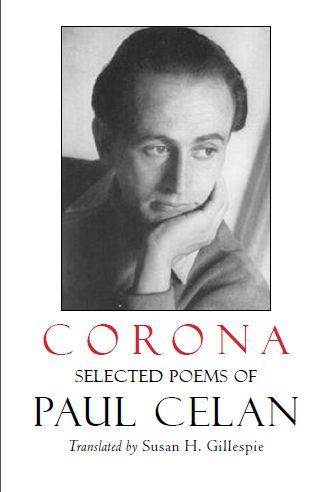 Paul Celan, arguably among the 20th century’s most important European writers, is commonly pigeonholed as a poet of the Holocaust—a term, however, he never used. Susan Gillespsie’s Corona seeks to unwind such facile assumptions about Celan, charting a more idiosyncratic and embracing path through his large oeuvre. As Gillespie writes in her Translator’s Introduction, “The poems, taken as a whole, are invisibly interwoven in what Celan might have termed ‘constellations’ of meaning, which extend beyond individual text to create a harmonic architecture of echoes and references. We are present at the creation of a world, perhaps even a universe of meaning.” Such a totality necessarily includes not only the poet’s well-known works of memory and memorialization, as well as poems on contemporary politics, but are juxtaposed in this collection with love poems, reflections on stays in mental hospitals and the sometimes ribald comedy of life. For even as Celan’s writing is hermetic, it is also resonant with personal grief and longing, to which in varying degree Celan alludes in every poem he writes. Derived from years of study, Gillespie’s translations embody this personal dimension, facilitated by their ease of diction and attention to the “somatic” and rhetorical aspects of Celan’s verse—their sound, gait, tone, and gravity—as well as to their internal and external echoes—or what Roman Jakobson called their “poetic etymology.” Noticing this in Celan’s writing—but applicable to her translations—she writes: “Here, poetry is not what gets lost in translation, it is, itself, an act of translation—of experience and thought—into new language.”