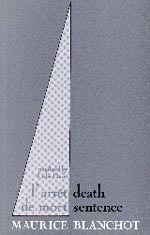 This long awaited reprint of a book about which John Hollander wrote: "A masterful version of one of the most remarkable novels in any language since World War II," is the story of the narrator's relations with two women, one terminally ill, the other found motionless by him in a darkened room after a bomb explosion has separated them. "Through more than 40 years, the French writer Maurice Blanchot has produced an astonishing body of fiction and criticism," writes Gilbert Sorrentino in the New York Review of Books, and John Updike in The New Yorker: "Blanchot's prose gives an impression, like Henry James, of carrying meanings so fragile they might crumble in transit."