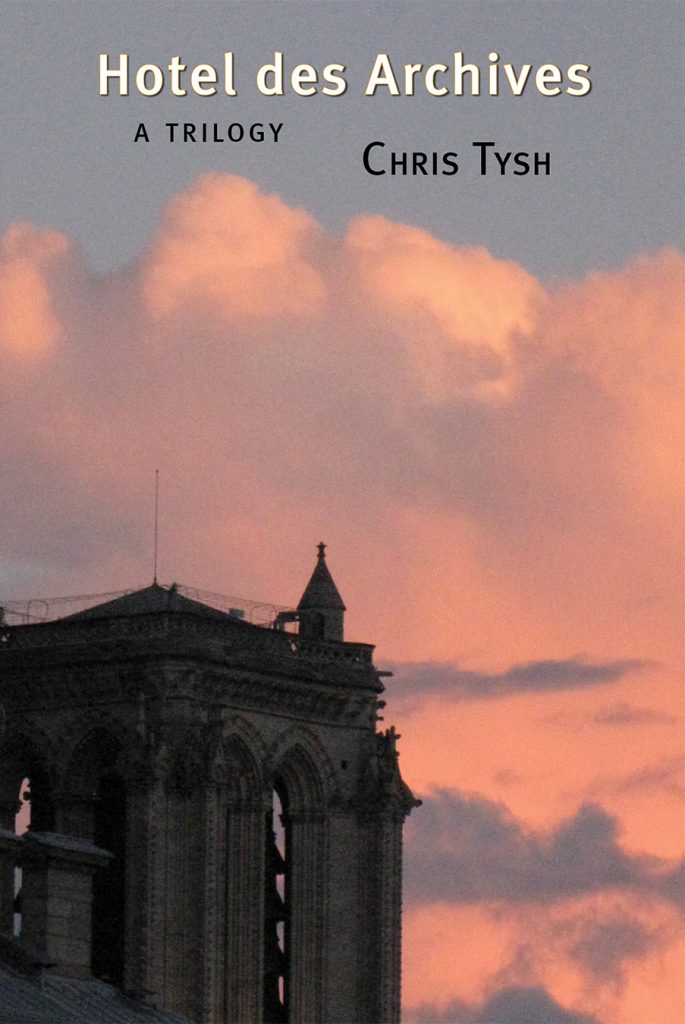 Hotel des Archives is a trilogy of books consisting of verse recastings from the French novels of Beckett, Genet and Duras. Synchronous with postmodernism's aesthetics of appropriation, détournement, sampling and other intertextual strategies, the project operates a double shift of genre and language, since she moves from the original French and from prose to lyric. These transcreations, as Tysh has been calling them, allow her to forsake the traditional mode of self-expression in favor of one that "translates" other cultural materials, creating an artistic network beyond boundaries and temporalities.

In Molloy, the Flip Side, she uses the French language in which Samuel Beckett wrote his novel Molloy to guide her into finding a contemporary American vernacular through which the hapless narrator speaks. Her three-line stanza formation compresses Beckett’s diegetic universe, sparse as it is, and allows her to link the two texts through the projection of a new, speaking subject — a funny, witty, old and disabled bum, going slowly nowhere.

In Our Lady of the Flowers, Echoic, Jean Genet's 1943 disturbing elegy for social heterogeneity, she attempts to find a poetic equivalent with which to evoke Divine, Mignon-Dainty-Feet, and the young assassin, Our Lady, three saintly figures in a forbidden realm of the senses. The seven-line stanzas of my Our Lady of the Flowers, Echoic are spacious enough to accommodate the narrative arc, while foregrounding their lyrical impact.

Her third transcreation flows from the novel The Ravishing of Lol V. Stein by Marguerite Duras, the celebrated author of the Hiroshima Mon Amour screenplay and winner of the Goncourt Prize for The Lover. In this type of relational poetics, she strives to maintain the narrative spaces and affects, while finding a new set of porous networks – lyrical trajectories that pass through various signposts of the text.

Chris Tysh reads in, around, and through Molloy in this ingenious transformation of Beckett’s French prose into compulsively vernacular English tercets. The narrative echoes in Molloy: The Flip Side make for an unsettling familiarity, spiked with the verbal equivalent of dark chocolate and homemade rum.
—Charles Bernstein

Like Genet, Tysh is something of a snake charmer—or the snake itself?—lyricism unfolding kaleidoscopically, extending emotions and meanings, fastening this mouse/reader to the spot.
—Robert Glück

Chris Tysh’s gorgeous transcreation of Marguerite Duras’s haunted and haunting early novel draws out the lyricism of the text’s emotional algebra almost in the way one might draw poison from a wound. In Tysh’s condensed explorations of betrayal, voyeurism, and imitative desire, one finds a further textual ravishment—a lushly articulated response to Duras’s original that captures both the calculated and explosive qualities of its cry.
—Elizabeth Willis