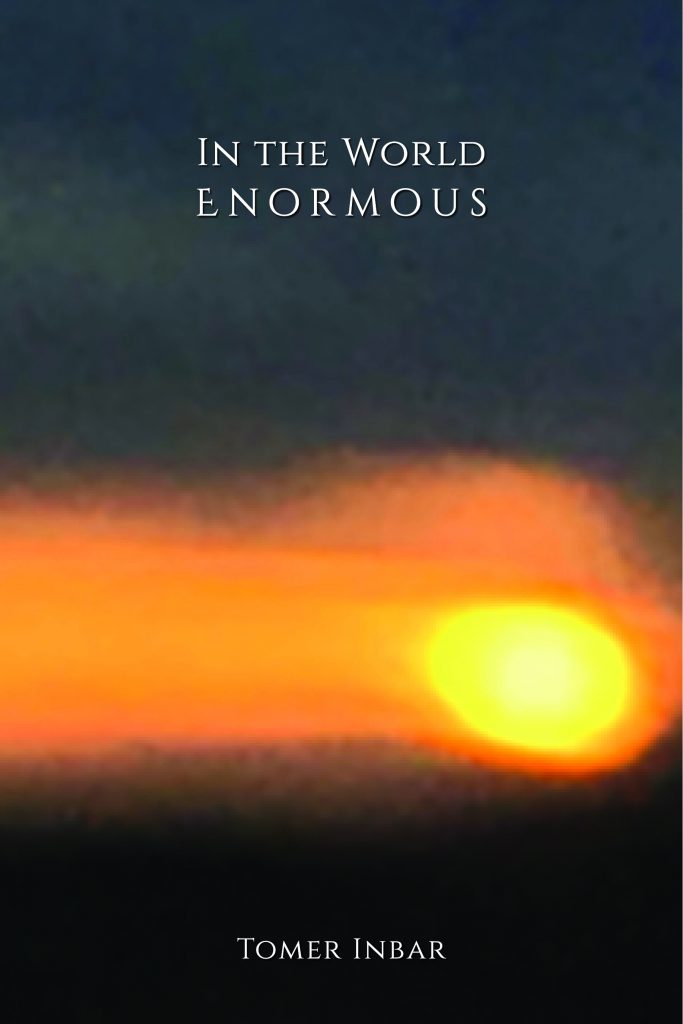 In the World Enormous

In the World Enormous is engaged in transition, conversation and what transforms. Focused on a time beginning shortly before the death of Tomer Inbar’s mother and ending after the birth of his twin daughters, these poems constitute a speaking out of and about passing and starting, in plangent energy and restless balances finding words simultaneous to a human intimacy and intensity. In part informed by his study of early Japanese literature, Inbar is open to these poems being read with a loose internal movement and multi-directionality—though within a totality presence inscribes and fi nds in you. Inbar writes, “I fi nd comfort in being present as things move. With sibilance. On their own volition. Taking the qualities of their construction along.” These poems moreover seem to compel us to think an impossible thought.

Tomer Inbar’s meditative, complex work reminds the reader of Hopkins’s “inscapes” and “instresses”—profound encounters, fruits of intense moments of observation, and an enviable musical ear. I am particularly drawn to Inbar’s unusual, even innovative, usage of parentheses throughout this collection. On the one hand, it is what Olson meant by the poet’s ability to “record the listening he has done to his own speech and by that one act indicate how he would want any reader, silently or otherwise, to voice his work.” Moreover, Inbar uses parentheses to draw out the polyphony, worlds-within-worlds, commentary-upon-commentary, workings of the restless mind, as in, memorably: “Taking sticks to the mortuary: wild / Iris (bunches (of fresh tea (mint &) / marjoram (be discreet (she said) I / have neither their leisure nor / cadence) to arrive (in her state) momentarily.”
—Jake Marmer

Like the poetry of A.R. Ammons, David Ignatow, George Oppen and Charles Reznikoff, Tomer Inbar’s poems attend to reality’s finest internal and external details. Artifacts of a nimble mind, these poems delight and enlighten. They have the capacity to stun the reader into a heightened state of wakefulness to become partners to the poet’s reality, living on the perpetual edge of witnessing abundance.
—Jerry Mirskin

Tomer Inbar moves in careful relation to the enormous world, as if every word is a pearl of great price and the words exchanged between people are the greatest of all. These are poems that move between minds and reveal the deeper structures of thought and emotion that glide beneath the surface. Many of these poems are about human connection, and Inbar is an acute observer of the deeper ways that language opens fields of meaning between us … the beauty of a child’s mind, and all of the spaces that exist between thoughts, sounds, animals, museums, and the words we pass between each other.
—Kristin Prevallet