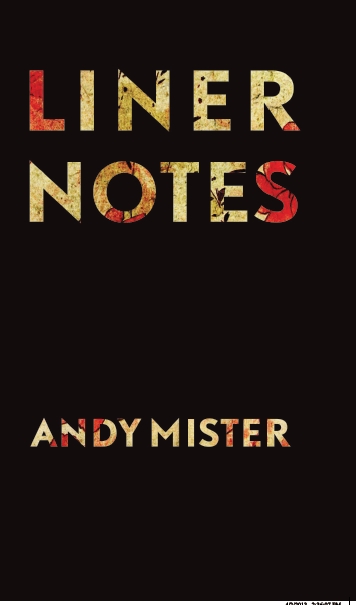 Liner Notes is a semi-narrative prose poem, a meditation on alienation and pop culture. Beginning with the Beach Boy’s unfinished masterpiece "Smile", Mister describes a world populated by ghosts. Adrift on a sea of drug use, boredom and popular entertainment, Mister traces his relationship to the obsessive collection of ephemera and the coterminous feelings of isolation and loss. Like an iPod on shuffle, lyrical descriptions of urban landscapes and memories of failed relationships mix with song lyrics and deadpan anecdotes of death, failure. In the end a life, like the book itself, is assembled from the detritus of pop culture. As he writes, “Each billboard is a monument to our ability to believe in anything, at least for a moment. Then it’s gone.” But belief’s shadow remains, amid the news of a world shot full of holes, which Liner Notes’ hauntings seem to delineate like the chalk figure at the center of every homicide scene we’ve ever imagined ourselves appearing within… “There’ll probably be some music there, lining your eyelids.”

I love the blunt care for real time, with all its gaps & noises & bends, Andy Mister takes in the searching, powerful scroll of paragraphs that make up Liner Notes. Working through the implied vision of an undecided note taker prone to stark assertions and excavating insights to perception, Mister puts songs at the heart of his relationship to language & digs away at the disappearances they reflect in their, and his, histories. "The world becomes boring when you brush away the detritus" says the same mind that listens to own its aloneness, & desires, evenly, "to dissolve each distance in distance". —Anselm Berrigan

Andy Mister’s loving and disturbing “notes” create a complex harmony (sympathy) between public noise and private revelation. In the midst of Liner Notes we read: “Childhood is a song I can barely remember the words to. They only come back to me when I am thinking of something else.” that something else is at the heart of this compelling and magical book. Listen! —Peter Gizzi

Jim Carroll’s “People Who Died” comes immediately to mind, but Liner Notes has more in common with David Markson’s late books or with Frank O'Hara's “Hatred” than with any pop song. What's most evident, though, is that Andy Mister cares for his readers by caring about his subject. He's your friend, and he's alive. —Graham Foust

I had forgotten with what feverishness I used to study the back jackets of my LPs. Was I seeking to understand my desire? The sadness of desolate beauty? The sensitive youth’s love affair with death? It’s all here—as breathless and disarmingly self-conscious as the sweetest parking-lot kiss. I love this book. —Jennifer Moxley