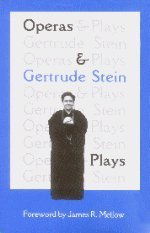 Stein considered this her definitive statement for the opera and the theater, yet, incredibly, Operas and Plays has remained out of print for half a century and has become so rare that even scholars read it in Xerox. Now reprinted for the first time since she published it herself in Paris (Plain Editions, 1932), Operas & Plays contains the most important of Gertrude Stein’s extraordinary contribution to the literature of opera and theater. One of America’s most influential writers—and most famous expatriates - she represents the fusion of modernism and postmodernism in these “word plays.” This book contains twenty different pieces virtually all of which have been out of print for decades. It includes the original version of the opera “Four Saints in Three Acts” (1927), set by Virgil Thompson, as well as “A Lyrical Opera Made by Two” (1928), “Saints and Singing” (1922), “Reread Another” (1921), “The Five Georges” (1931), and two movie treatments, among others.