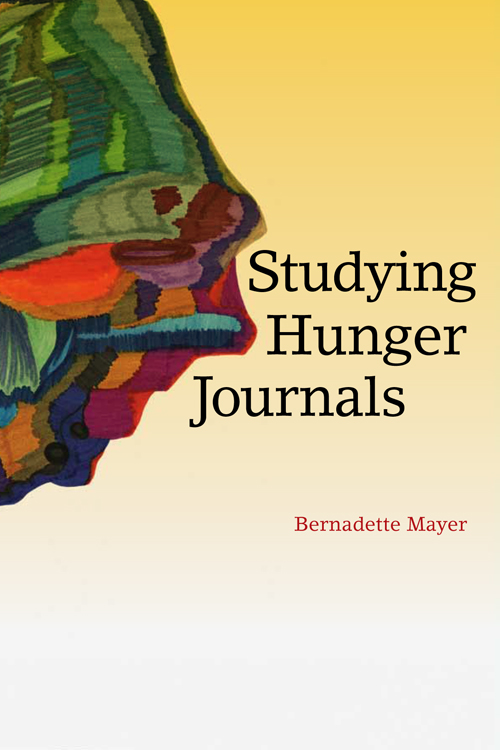 In 1972 Bernadette Mayer began this project as an aid to psychological counseling, writing in parallel journals so that, as she wrote in one (in bed, on subways, at parties, etc.), her psychiatrist read the other. Using colored pens to “color-code emotions,” she recorded dreams, events, memories, and reflections in a language at once free-ranging and precise—a work that creates its own poetics. She sought “a workable code, or shorthand, for the transcription of every event, every motion, every transition” of her own mind and to “perform this process of translation” on herself in the interest of evolving an innovative, inquiring language. Studying Hunger Journals registers this intention within a body of poetry John Ashbery has called “magnificent.”

Made public at last in its gorgeous various and unstinting entirety, Studying Hunger Journals reveals itself to be one of the great in fact epic works of a movement that could never be given a name. No label fit for such limitless activity, its terms being those of our restless language and its relentless go-betweens that move and may alter. Attend therefore and let them have their way, these words given without let and best received in kind.
—Clark Coolidge

We have been waiting a long time—decades, in fact—for the publication of Studying Hunger Journals, so this is an occasion to celebrate—that they have come into the world, into the light, and into our hands. Mayer’s experiment, her transcription of consciousness, is timeless and sexy. There is gentle genius in her heroic quest to be “an observer of self in process.”
—Brenda Coultas

Someone irritated me recently by saying “Our time lacks a poet’s poet. You know, a poet who gets you writing.” SHAME ON YOU I said. YOU ARE LIVING ON THE PLANET WHERE BERNADETTE MAYER LIVES AND WRITES! Are there bigger shoulders we stand on today? I don’t think so. Every time I’m in the same room as Bernadette I look around and think, “She is the best poet and smartest person
here!” My religion is Poetry and Bernadette Mayer is High Priestess!
—CAConrad