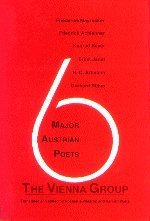 Following World War II, writers and poets in Austria sought to distance themselves from the German influence and to rescue their language from the continuing abuses by the Austrian establishment. The established order, which had embraced collaboration with the Nazis, remained provincial and hostile to any experimentation. The Vienna Group (Friederike Mayr6cker, Friedrich Achleitner, Konrad Bayer, Ernst Jandl, H.C. Artmann and Gerhard Rahm), a group of friends, mining other earlier outside movements -Expressionism, Dadaism, and Surrealism -sought to make art which threatened the established order. In this, they succeeded. The stance adopted from the beginning is best summarized by the introduction to the group's initial manifesto by H.C. Artmann - "There is only one inalienable principle, namely that anyone can be a poet without ever having written or uttered a single word." It was a poetic logic which allowed for the use of dialect poems in much the same way as sound poems; visual poems; alternatives to sentences; lists and everyday information; continuing experimentation In not only form but in the nature of content. What better way to recover one's language than to charge it, to make it resonate, to enhance it and finally cause It to evolve. This first English anthology, The Vienna Group, edited and translated by Rosmarie Waldrop and Harriet Watts, contains a generous selection from each of the above poets, showing not only the variety but the intrinsic humor and sense of play which has made this movement's contributions all the more accessible. Their work anticipated not only the present concerns with the nature of language and syntax, it also provided the roots for the more widely revered work of fellow Austrians, Thomas Bernhard and Peter Handke. It is an essential and highly recommended addition to all collections.