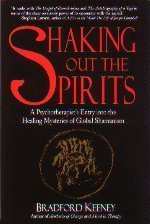 Shaking Out the Spirits

Bradford Keeney’s extraordinary odyssey began in 1963, when, as a respected professor, psychotherapist, and author, he found himself suddenly visited, without the influence of hallucinogenic drugs or shamanic teachings, by remarkable visions of “shamanic realities” that called him to some of the most remote areas of the world. Shepherded on his journey by the spirit of the Oglala Sioux medicine man Black Elk (whose time of death was virtually the same as Keeney’s birth), Keeney was initiated into the healing practices of tribal peoples in North and South America, of Christians in the African-American sanctified church, of songomas, sanusis, and healers throughout Africa (among them the bushmen of the Kalahari and the Zulu of Southern Africa), and finally one of the only living masters of a pre-Buddhist healing art in Japan. Illuminated with the author’s own photographs of his life among the shamans, and blessed by elder healers throughout the world (who passed along not only their sacred knowledge but their spirit guides as well), Keeney’s story gives voice to the mind, heart, and soul of shamanic healing.