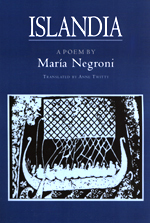 Islandia tells us of a race of exiled, conquering, Nordic heroes, who have landed on and settled an island (presumably Iceland) and remained there for generations, self-enthralled by their own identities as sung in their own Sagas. Islandia also tells us of the sophisticated and complexly ironical, lyrical verses of the author’s own persona, herself isolated, self-reflective, and exiled—in present-day New York City. These two tellings approach each other without ever quite touching, across a chasm of mutually re-enforcing but sharply distinct senses of absence. The work is brilliantly translated from the Spanish by Anne Twitty and is presented here in a bi-lingual edition.